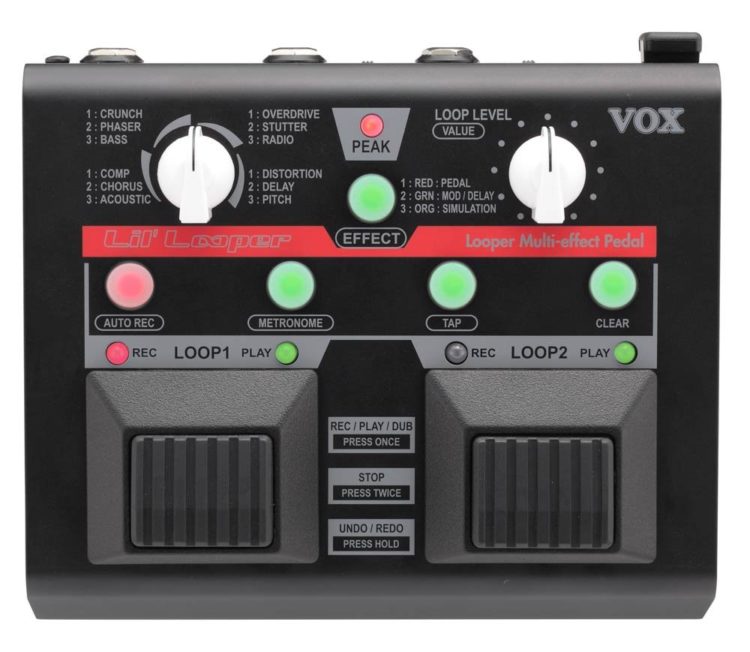 The Vox Lil Looper features two independent loops that can collectively hold up to 90 seconds of recorded sound, plus a handful of effects built right in. There are 12 total effects including compression, crunch, overdrive, distortion, chorus, phaser, delay, and stutter. There are also four simulation modes that can help transform your guitar’s tone into an acoustic, bass, radio, or pitch. 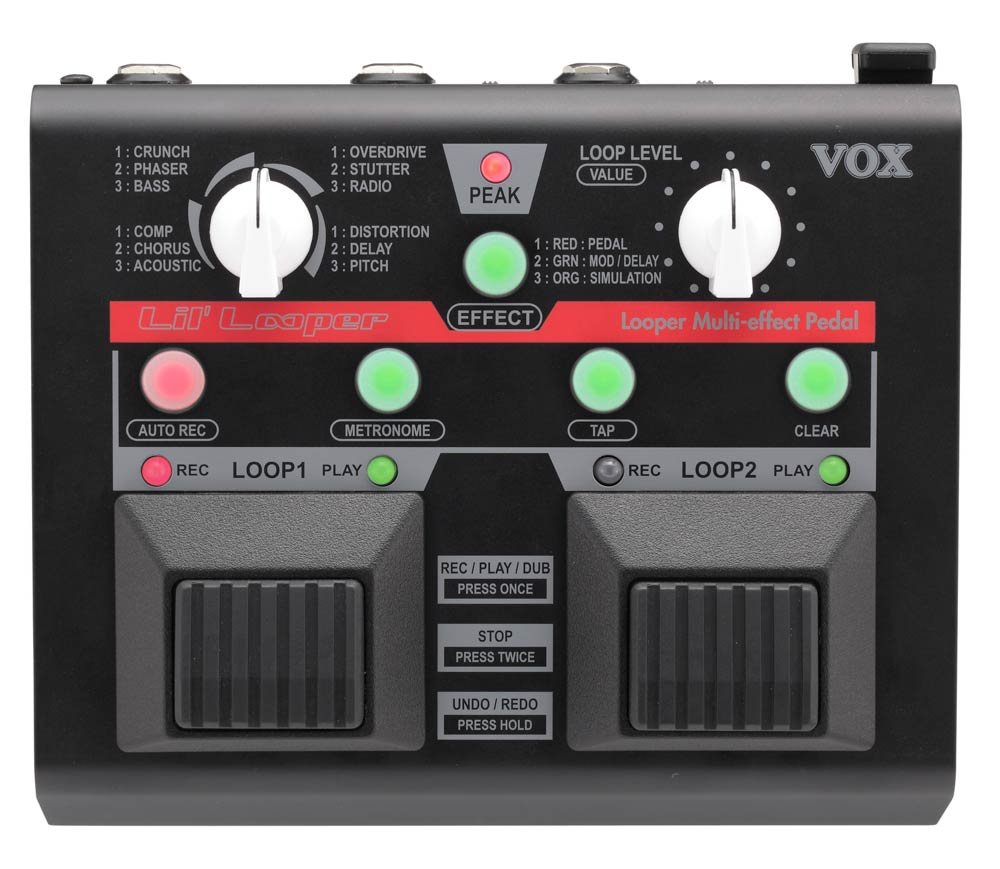 This is the first looper pedal I’ve ever played with and it took a little bit of hand, eye and foot coordination, but after a few hours with it, the pedal is intuitive and easy to operate.

Using the pedal is fairly straightforward. Press the loop button to begin recording, press it once more to end the recording, and to play back what you’ve recorded. If you have a recorded loop that is currently playing, and you simply want it to stop playing, you can tap the loop twice to pause it without deleting the loop entirely. If you want to delete the loop, simply hold the loop button down until the lights blink red.

Some more advanced techniques require using both loops. If you have a loop recorded on loop 1 and want to keep it going, but also create a new loop using the loop 2, you can simply press the second loop to begin recording a new phrase on that second loop while loop 1 is still playing. And just like for loop 1, you simply press loop 2 again to stop recording.

Pro tip: use the built-in metronome. Using the metronome (which also includes a tap tempo) will not only help you time the loops and when to hit the pedal to start and stop the recording but it will also activate what Vox calls the Loop Quantize Function.

The Loop Quantize Function “corrects the loop-end timing” which is supposed to help create recorded phrases that are the correct length according to Vox’s user manual for the pedal. This is pretty cool!

Honestly, it’s nice to have a ton of additional effects but I never found myself using any of the effects except maybe the occasional delay or chorus. However, since the pedal has two separate loops, it’s a lot of fun to play two different loops using the different effects. And of course, you can always stack recorded loops on top of one another as well.

For example, I really enjoyed using the pedal to create an 80’s style riff with the delay effect and a separate chorus pedal. Or if I wanted to improvise over a chord progression, I can record the progression with one of the loops and play over it. I could also introduce another riff or melody using the second loop. Using the two separate loops is great if you want to toggle one of them on or off.

If you want to stack a bunch of sounds on top of one another on the same loop, that works too. The Lil Looper allows for overdubbing, which means you’re layering the loop with more sounds, but this means if you toggle that loop off, all of the layers on that loop will also be turned off. Makes sense, right?

If there is one downside to this pedal, it’s the fact that all of the effects are on a single knob, which means you can only use one effect at a time. It would have been nice if Vox put the modulation effects like chorus, phaser, etc on a separate knob so you can mix up the possibilities. But again, I never relied heavily on the Lil’ Looper’s effects outside of the main function of looping.

One of the more interesting capabilities of the Lil Looper is that it has a mic jack. I’ve heard of people looping their vocals, like say for a chorus section of a song and then using the loop to create a vocal harmony. The mic jack is also able to take advantage of all of the effects as well. So if you want to give your voice some delay, you can do that too. You can also use this port to plug in a myriad of instruments. This gives the looper more utility and opens up a lot of possibilities for non-guitar related uses.

As you can see, there is so much you can do with this Lil Looper, so much that it would take many more pages to list all of its functions here. If you’ve never played with a looper before, the Vox Lil Looper is a pretty solid choice and offers a ton of versatility. You can pick up a used version for about $100 to $140 depending on condition. It’s worth every penny.

Review contributed by Billy from GuitarTricks

Billy is the Community Specialist for Guitartricks.com. GuitarTricks.com as over 11,000 lessons covering everything a beginner guitar needs to know to get started, as well as more complicated techniques like tapping, sweeping, scales, and more.