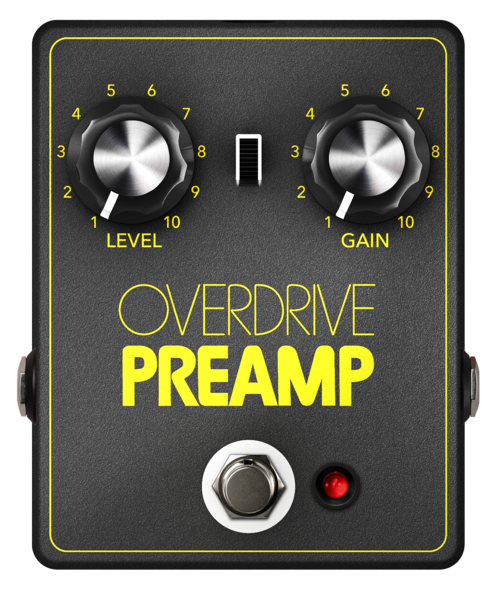 The Overdrive Preamp is a faithful recreation of the rare first-generation DOD 250. Like the original DOD 250, the Overdrive Preamp can act as a boost pedal, preamp, overdrive pedal, or even a distortion pedal depending on how you set the “Gain” knob.

WHERE TO BUY THE OVERDRIVE PREAMP

However, JHS Pedals have made a few adjustments to make the Overdrive Preamp fit more in line with today’s modern guitar pedals – the “Level” control has been changed to give you access to more volume than the original 250 had, and a secondary clipping option (based on later versions of the V1 DOD 250) has been added.

The two clipping options can be selected using the slider switch on the Overdrive Preamp. In the down position, the Overdrive Preamp has the same clipping configuration as the original V1 DOD 250. Flipping the switch up changes to Silicon diode clipping which was found in later versions of the V1 250.

Level: Adjusts the output volume of the pedal.

Gain: Adjusts the amount of gain in the overdrive circuit. Turning this up creates more clipping as it pushes the op-amp harder.

For more information (including an interesting story on how the Overdrive Preamp came about), head over to the JHS Pedals website.

WHERE TO BUY THE OVERDRIVE PREAMP