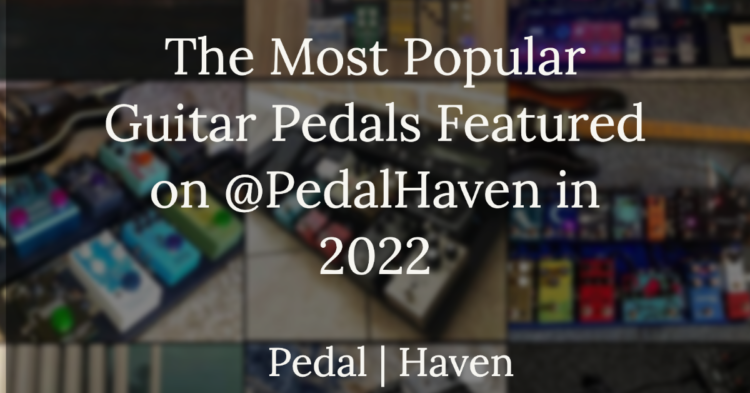 It’s that time of year again!

If you’ve been here a while you’ll know that I sit down at the end of each year and tally up all of the pedals featured on @PedalHaven in order to find which guitar pedals are found on pedalboards the most often.

This year is no different! This year there were 300+ pedalboards featured on the Pedal Haven Instagram account and nearly 3200 pedals! So let’s find out which of those pedals were found on pedalboards most often in 2022.

The Most Popular Guitar Effect Types in 2022

To start, let’s dig into the most popular types of pedals featured on pedalboards in 2022. This year, overdrive pedals were the most common, overall – with the Protein from Browne Amplification taking the win as the most commonly-spotted overdrive. 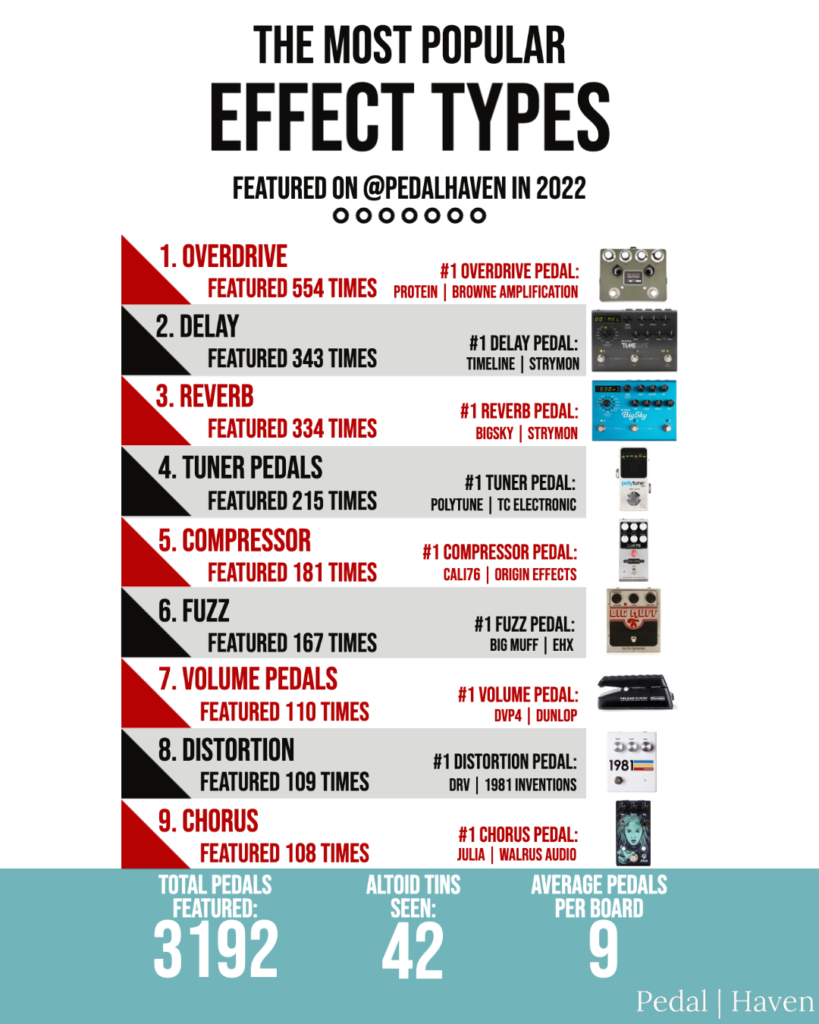 Now that we have an idea of the most popular effect types, let’s check out which pedals featured the most. It is never surprising to see tuner pedals taking the top spots here – after all, everyone should have a tuner on their board! 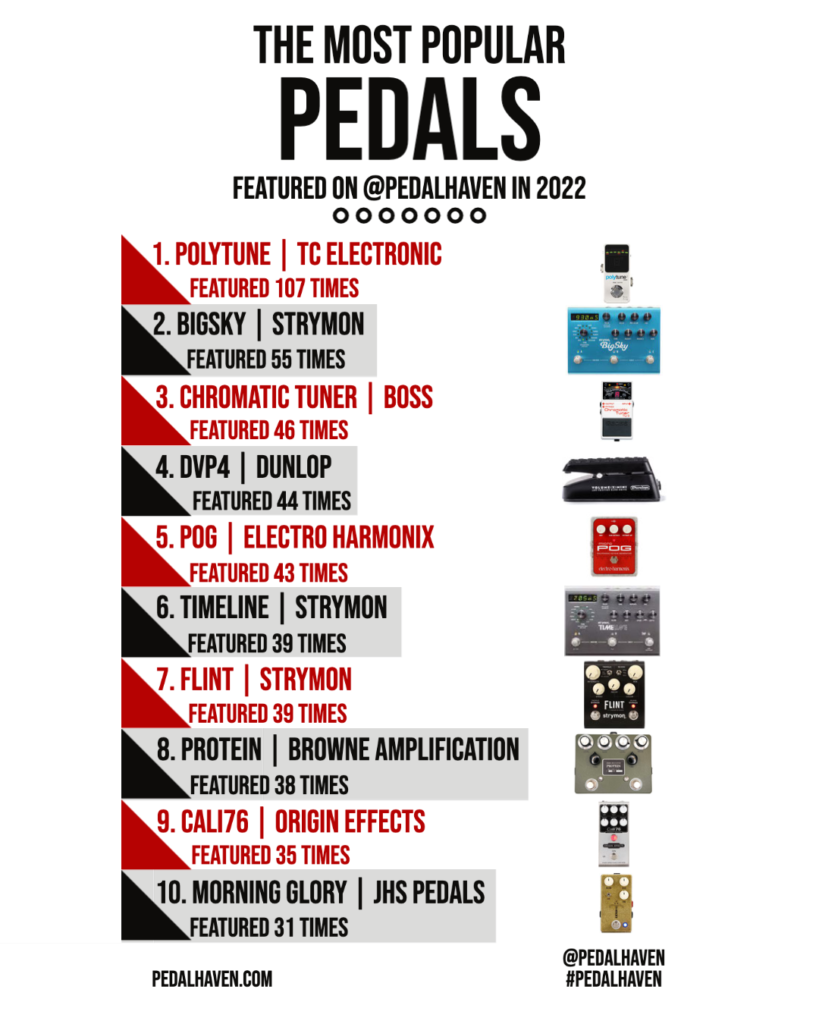 The Most Popular Overdrive Pedals of 2022 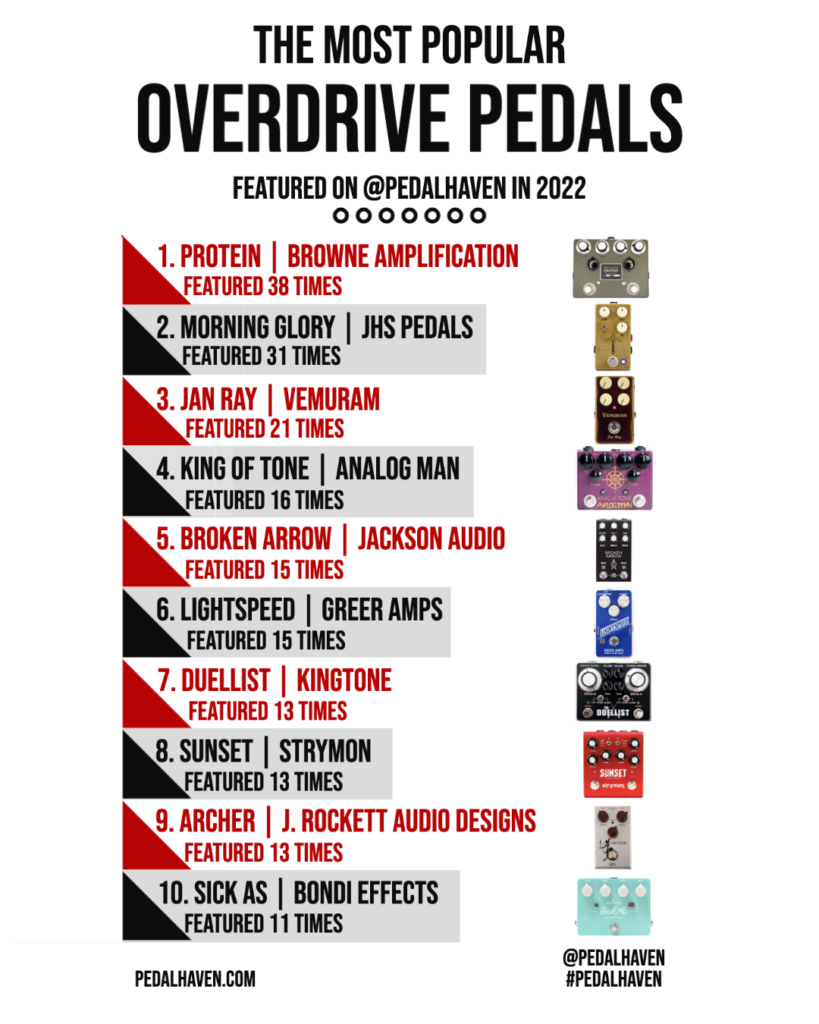 The Protein from Browne Amplification wins this year. Of the 533 overdrive pedals posted, 38 of them were the Protein – making the Protein the most widely-used overdrive this year. However, the Protein is followed closely by last year’s winner, the Morning Glory from JHS Pedals (featured 31 times) and Analog Man’s King of Tone. It turns out we all had Bluesbreaker fever this year!

The Top Overdrive Pedals of 2022

The Most Popular Delay Pedals of 2022 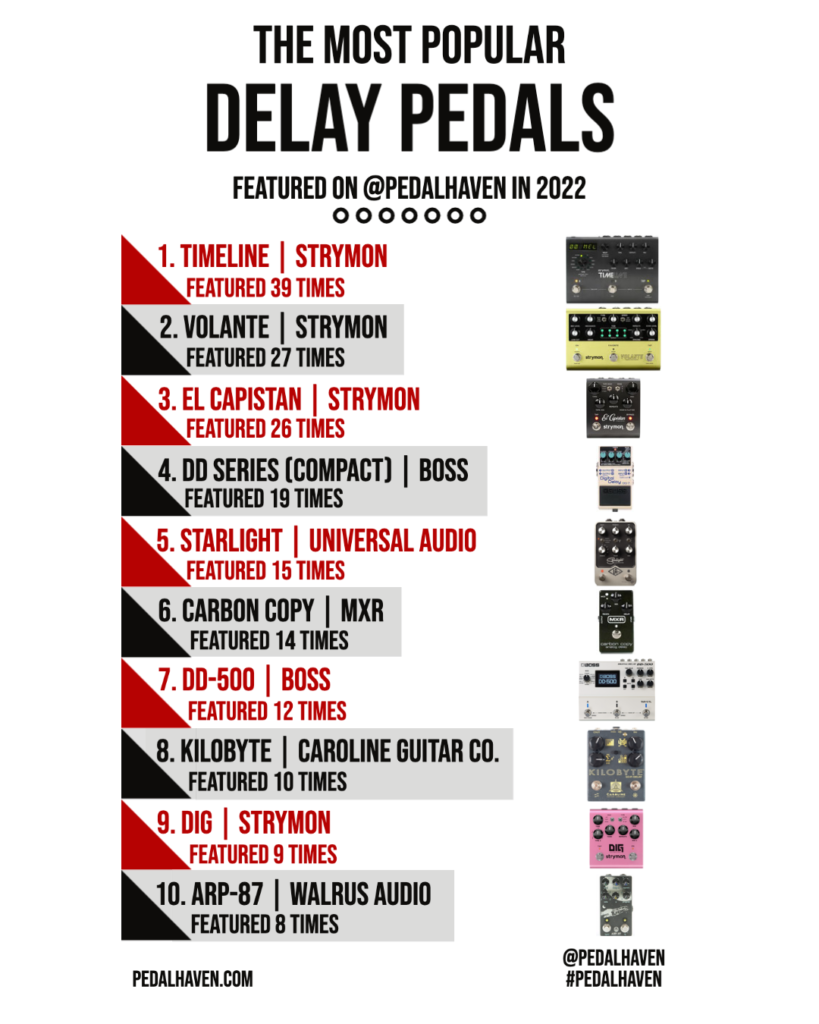 The Most Popular Reverb Pedals of 2022

Next up, let’s take a look at the Reverb category. Just like in previous years, reverb pedals were quite popular on pedalboards in 2022. And there were some heavy-hitter reverb pedals in this year’s ranking: 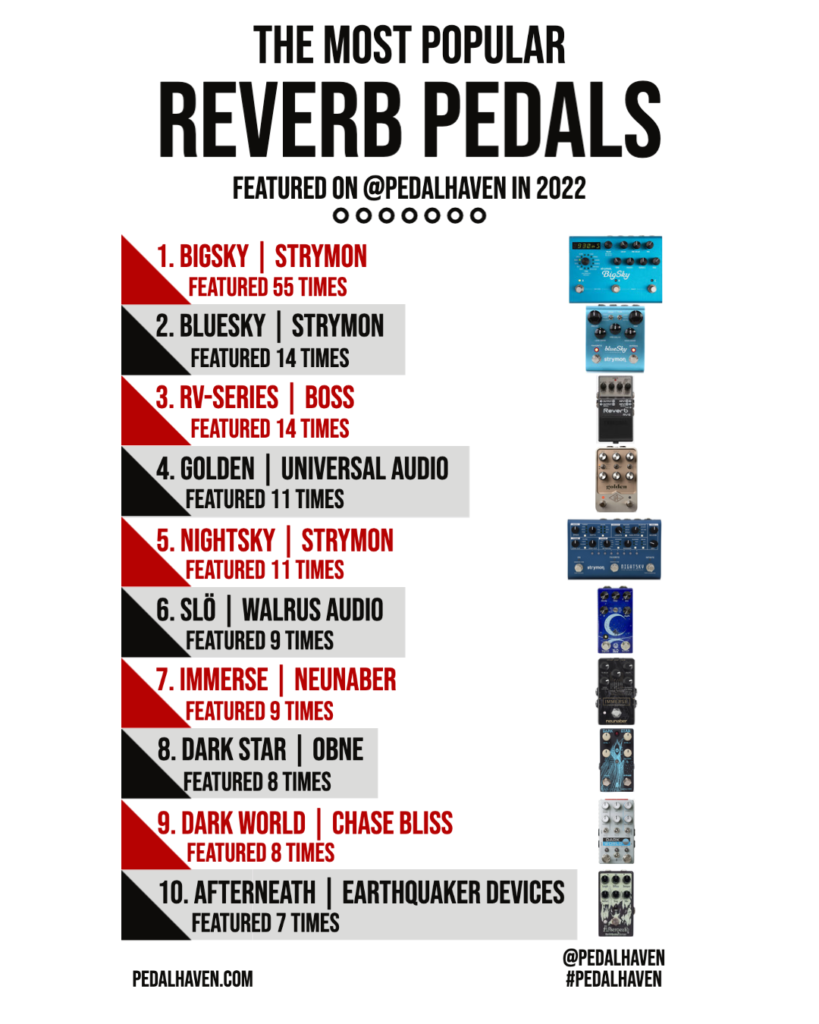 We see some familiar faces from the most popular pedals featured in previous years, but some new faces made the rankings this year too! Including Universal Audio’s Golden Reverberator and the Dark Star Pad Reverb from Old Blood Noise Endeavors.

The Most Popular Compressor Pedals of 2022 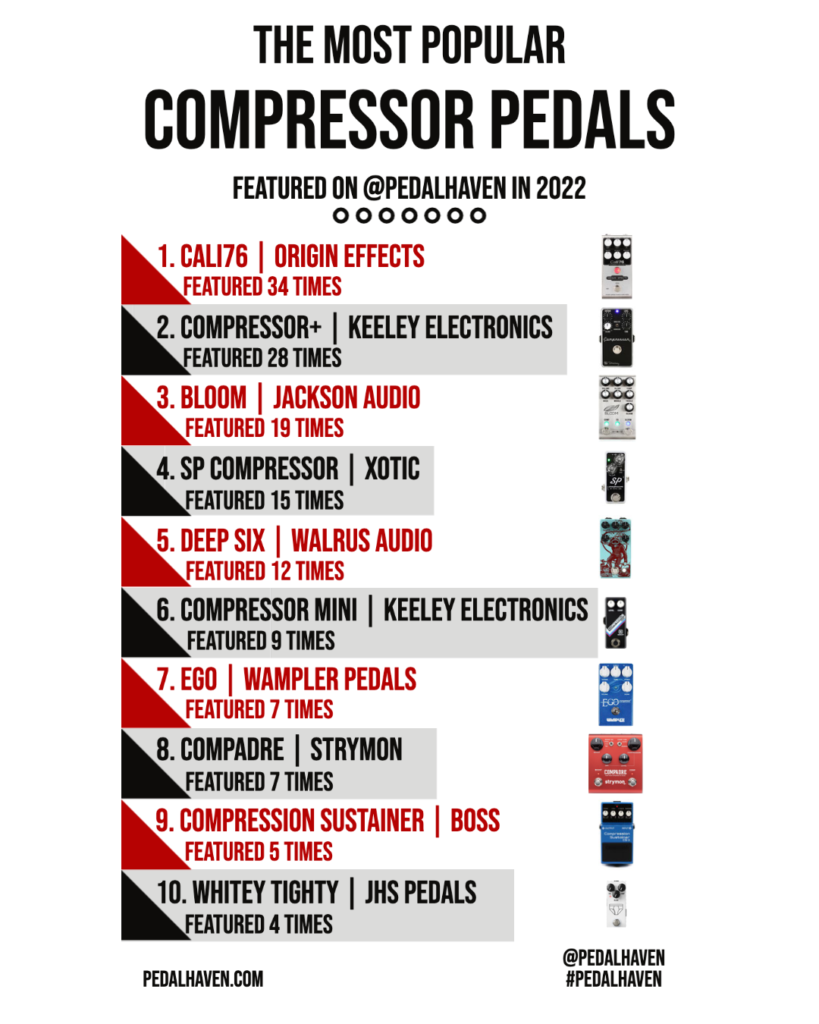 The Cali76 from Origin Effects took the win this year! Followed closely by the Compressor+ from Keeley Electronics, the Bloom from Jackson Audio, and last year’s winner, Xotic’s SP Compressor.

The Most Popular Fuzz Pedals of 2022

Everyone loves fuzz pedals! And fuzz pedals were the 6th most popular effect type found on pedalboards this year. But what were the most-used fuzz pedals? Take a look: 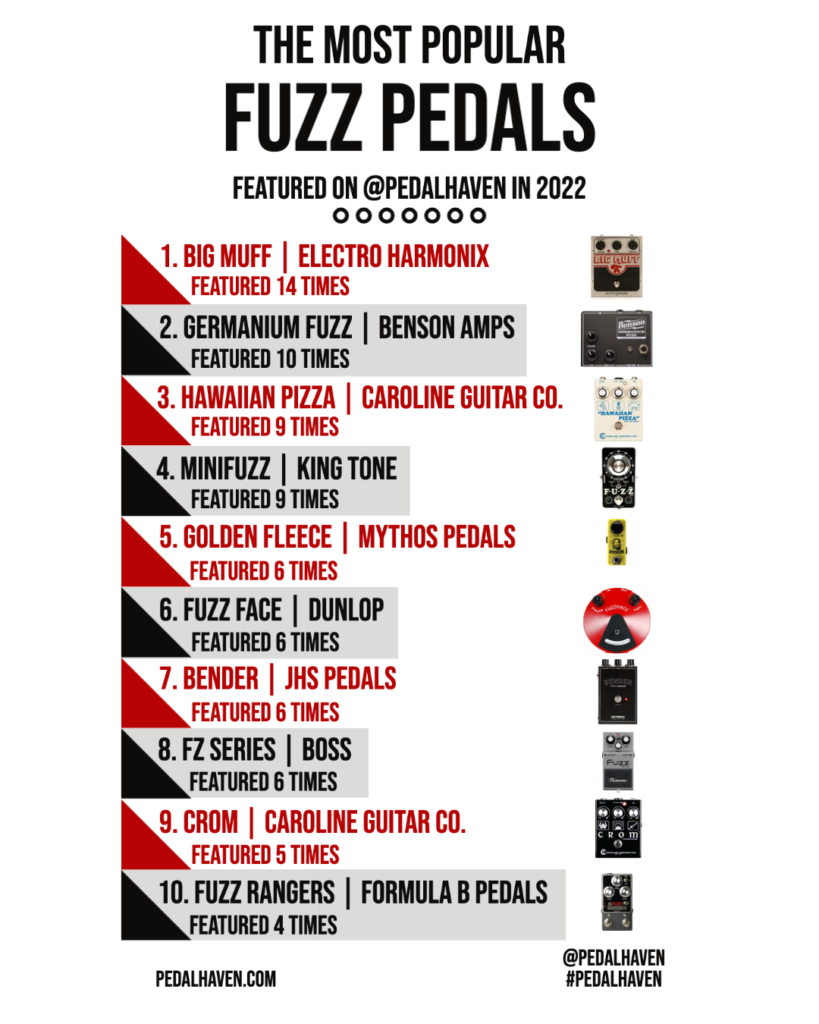 Perhaps unsurprisingly, the Big Muff from EHX took the win. However, when compared to previous years, there has been a drastic drop in Big Muff pedals on pedalboards! Last year there were 40+ Big Muff featured, but there were only 14 this year! That said, this classic fuzz still took the #1 spot in the fuzz category.

The Most Popular Distortion Pedals of 2022

It turns out that 2022 was the year of the rat. The original ProCo RAT took second place – but of the other 9 pedals here, 4 of them are inspired by the legendary ProCo RAT circuit. Here’s a look at the rankings for the most popular distortion pedals: 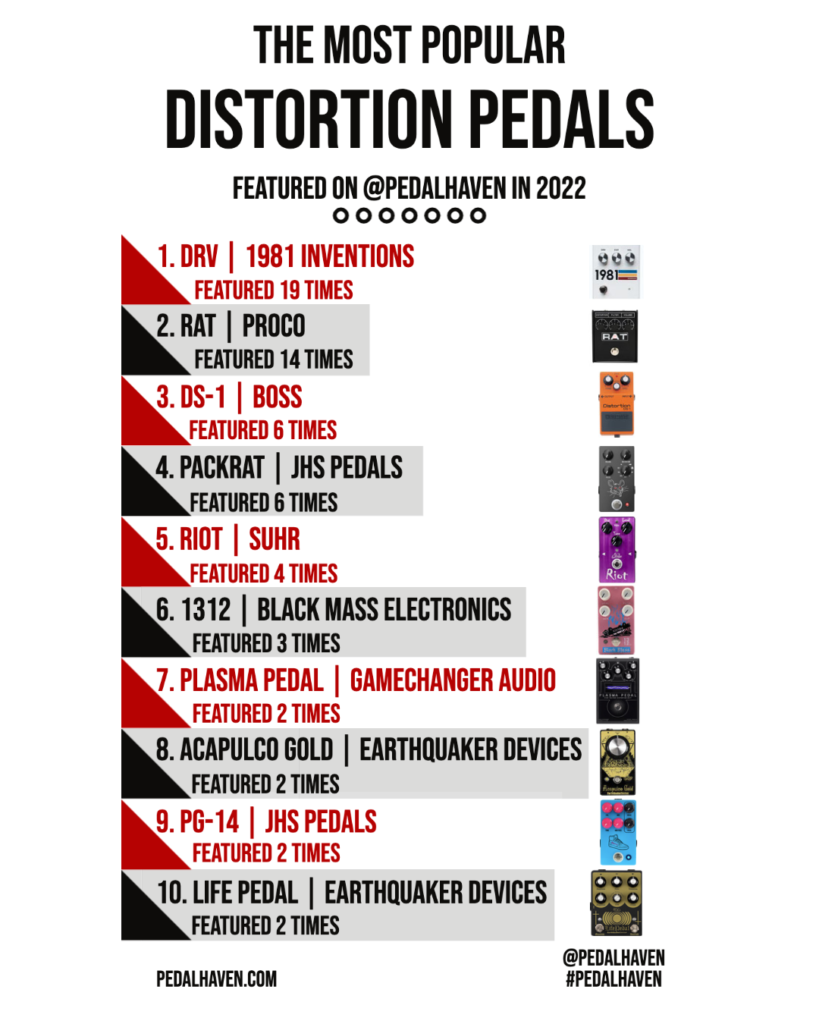 The Top Distortion Pedals of 2022

The Most Popular Modulation Pedals of 2022 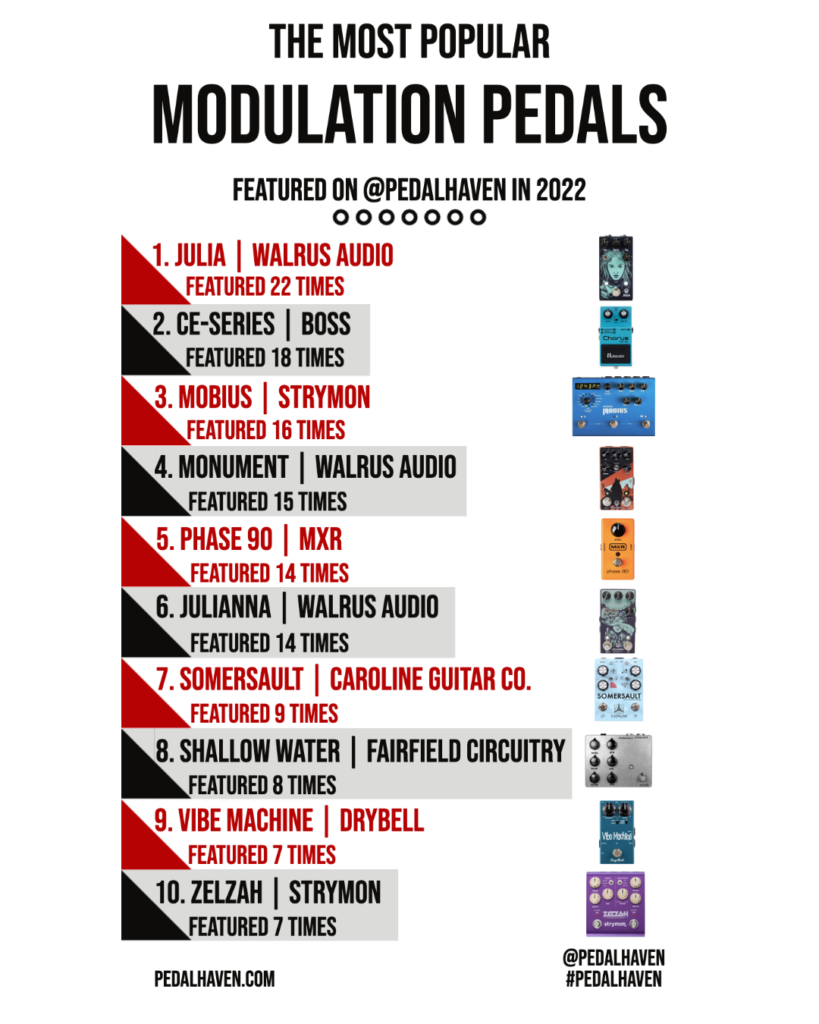 Amp and cabinet simulation has come a long way in recent years, and because of this, we are constantly seeing amp & cab sim pedals popping up on boards. So this year, for a new category I wanted to find the most common amp or cabinet simulation pedals on pedalboards this year: 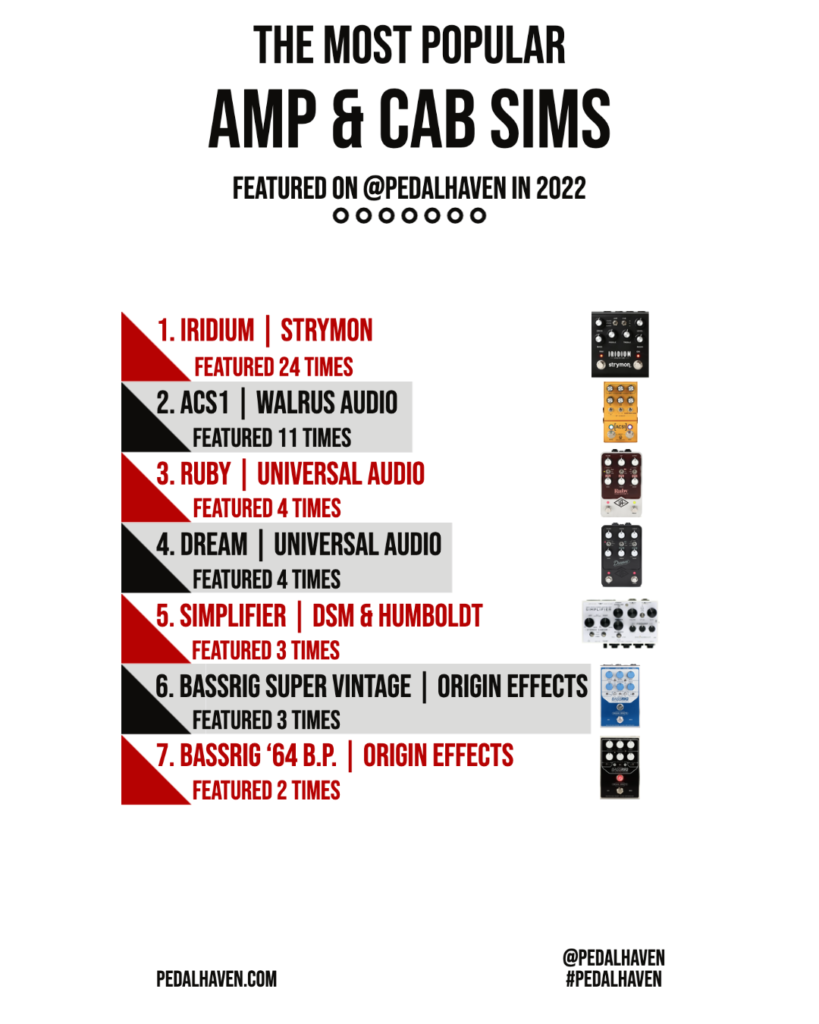 This year’s winner, the Strymon Iridium has been a staple in the amp sim world for a few years now. And rightfully so, it is great! However, it is nice to see that the new line of Universal Audio amp simulation pedals becoming so popular – the Ruby and the Dream from UA took 3rd and 4th place this year, despite only being available for the latter half of 2022.

Thanks to everyone for submitting their pedalboards this year and thanks to you all for checking this out! If you’re not already, head over to Instagram and follow me at @PedalHaven and feel free to submit your pedalboard while you’re there!